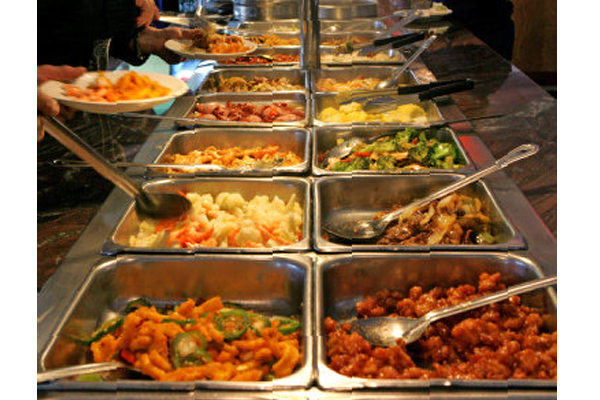 The other day I was at a speaking engagement where I talked about making good choices when eating out. As I was preparing my talk, I did a lot of reflection on my habits as an obese person who loved buffet restaurants and super sized portions.

I remember eagerly anticipating going to Ryan’s Buffet where I could eat as much as I wanted. A funny part of my buffet experience was that I never went back for seconds. Instead I asked John to go get me more fried chicken, more potatoes, or a second dessert. I always felt as though people might judge a 300-pound woman going back for seconds, thirds, or fourths. And if they did, perhaps they were a little bit right.

I recall sitting in a restaurant booth at Applebee’s or Ruby Tuesday trying to decide which entree had the most food. I’d choose based on quantity rather than quality. A part of the dining experience that I always looked forward to was the “pre-food” or appetizers that many sit down restaurants offered. Some provided buttery, soft yeast rolls, while others brought bowl after bowl of tortilla chips.

As I was doing my talk the other day in front of the audience, I asked them this question:

If you don’t put a loaf of bread, yeast rolls, or chips on the counter while you are making dinner and encourage your family to eat them, then why would  you eat those foods at a restaurant before your meal comes?

This seemed to really resonate with a lot of the attendees. Why in the world would you ask your family to fill up on bread or chips before their meal? I know I wouldn’t – even when I was morbidly obese.

But I certainly did it at a restaurant.

Breaking this habit of pre-food at restaurants was a bit difficult. Honestly, I had gotten into the habit of eating half my dinner calories before dinner and I truly looked forward to spreading butter on the already buttery rolls or dipping the chips into salsa. When I ate with John or a close friend, I asked that no pre-food be brought to the table and that made it easier. However, when I ate with a large group or people I was not close to, I didn’t feel comfortable asking everyone to sacrifice their calories for me.

What helped me stay strong was to determine ahead of time whether or not I’d have any of the appetizers. If I decided I just couldn’t pass up chips, I gave myself a number limit – usually three or four. If I wanted a roll, I had a quarter or a half of a roll. Pre-deciding about the pre-food saved me many a time from eating way more food than I needed.

When people asked me why I wasn’t having any pre-food I responded one of two ways. I either told them that I was saving my calories for dinner, or told them that since I didn’t eat appetizers at home, I wasn’t going to eat them at a restaurant. People were generally fine with either of those answers, but I did occasionally experience some negative peer pressure from my adult friends as they protested that if I was being “good” then they had to as well. It was kinda funny to see that happen.

How do you handle these kinds of situations? Do you ever think about mimicking the good behaviors you have at home in a restaurant? Diane